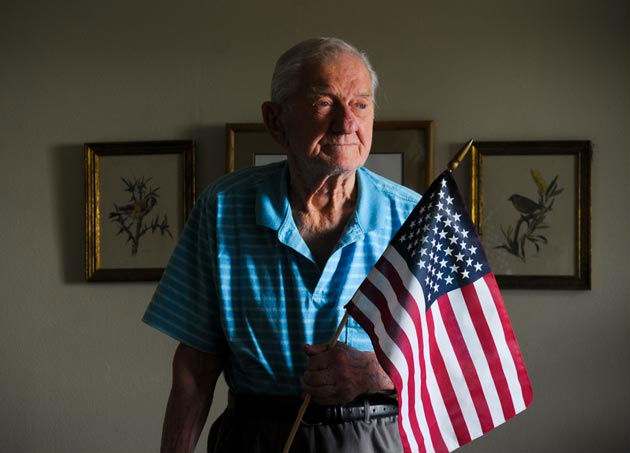 Leo Maczulak, at his apartment at Friendship Manor in Isla Vista on Feb. 20, served as one of Gen. Dwight Eisenhower’s personal bodyguards during World War II and was with him when Germany surrendered in 1945. “When they announced that the war was over, people in France and Germany just went wild,” he says. (Lara Cooper / Noozhawk photo) 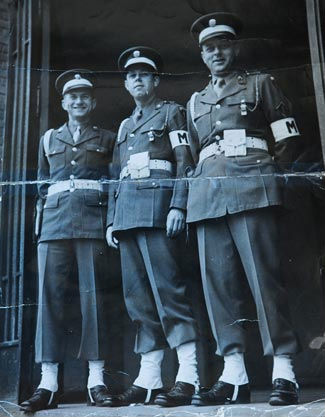 Sitting in his apartment at Friendship Manor in Isla Vista, the nonagenarian World War II veteran recalled some of his incredible experiences from his time in the Army.

But these war stories differed quite a bit from those of most veterans. You see, the 92-year-old Leo Maczulak served as one of legendary five-star Gen. Dwight Eisenhower’s personal bodyguards during the war.

The service gave Maczulak a front-row seat to history. He served in Europe during the most active time of the war, traveling everywhere Eisenhower went, vetting high-profile visitors coming to see the general and eventual 34th president, and riding in a Jeep as part of Ike’s motorcade.

Maczulak has been living in Isla Vista for the last year and a half since moving from New Jersey. His daughter, Anne, who lives in Santa Barbara, had already been planning to move her father from the East Coast when Hurricane Sandy struck in 2012. He had been without power for eight days when they began packing up his belongings for the move west.

A native of Philadelphia, Maczulak admits he misses the East Coast, and the transition to life in California has been a bit of a challenge.

Father and daughter sat down with Noozhawk last week at Maczulak’s apartment to share his story.

Maczulak enlisted in the Army in 1941 and underwent cavalry training at Fort Jackson in Columbia, S.C. But the government decided it wanted a military police company for Eisenhower’s headquarters, so a two-star general was dispatched to visit all the companies, including Maczulak’s.

“He picked out four men and I was one of them,” he said.

He still doesn’t know exactly how or why he was chosen — standing at over six feet tall, he thinks his height might have been part of it — but the decision propelled Maczulak into Europe and onto Eisenhower’s personal service.

The newly chosen bodyguards traveled to Boston, where they boarded the British liner RMS Mauretania, which took them to Liverpool, England. From there, they traveled to Stonehenge where they were stationed in a castle that had been taken over by the Army for Eisenhower.

That was the start of an incredible time in Europe, and the unit would go on to meet countless dignitaries and historical figures, including Gen. George Patton, Glenn Miller and Kay Summersby.

Maczulak met most of Eisenhower’s visitors during the period, closely checking their identification as the last line of security for him.

“I saw anybody who was anybody during the war,” he recalled. “They’d come in to see Ike about something and, if I was on duty, I’d salute them and say to the fellow with me ‘that’s so and so.’”

Maczulak said he once spied Patton walking toward them in Versailles, and he called out to fellow soldiers to be on their best behavior.

“I said to the other soldiers, ‘Look alive, here comes Patton,’” he said.

Patton saluted the men before going in to meet with Eisenhower.

When a water shortage hit war-ravaged Rheims, France, Army GIs stationed there, including Maczulak, had one other option with which to brush their teeth: champagne, which had been stockpiled in the castle in which they were staying.

Maczulak was in Europe when Germany surrendered in 1945, and he recalled the celebration that swept over the Continent.

“When they announced that the war was over, people in France and Germany just went wild,” he said. “Thousand of people in the streets.

“We had a pretty good time,” he added.

After his discharge from military service, Maczulak returned to Philadelphia where he worked as a tool and die maker for 35 years.

Seeing Eisenhower take the oath of office as president was an especially proud moment for Maczulak.

As for Eisenhower himself, “he was a nice guy,” Maczulak said.

He added that Eisenhower welcomed former guards and their families to the White House after his election. He even gave him a ride in his personal plane during a family emergency.

Having heard her father’s stories over the years, Anne Maczulak said that just when she thinks she knows them all by heart, he’ll surprise her.

“Over the years, I always think I’ve heard it all, and then every once in a while I’ll hear something totally new to me,” she said.